Andrew Hunter & The Gatherers are a power trio with a singer-songwriter at heart. These boys know how to rock, plain and simple. They also know how to write, proof being, the lead single “One Good Reason” from 2011′s critically acclaimed album Warhorses, which cracked the top 30 charts nationally. Meanwhile, 2009′s debut single “The Feel Good Song” got their foot in the door cracking the top 40. 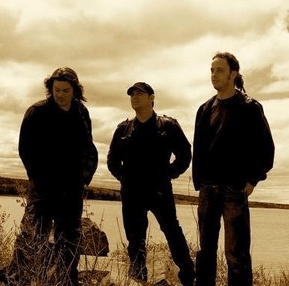 Hunter has established a reputation for writing and performing the kind of catchy songs audiences love to sing along to and radio loves to play. Most recently “Remember” has been chosen to appear in the ABC/Global hit TV series “Rookie Blue” airing spring 2013 to millions of viewers in the US and Canada. He first caught the attention of radio when “The Feel Good Song” was chosen Regional Winner of the RadioStar national songwriting competition in 2009. That song also went on to be featured on the popular TV series, “Degrassi: The Next Generation” which airs in over 160 countries around the world.

Andrew Hunter & The Gatherers are a hardworking touring band, sharing stages with The Trews, Joel Plaskett, Matt Mays and Jimmy Rankin to name a few. They have played and headlined festivals throughout the region and have a home in top venues throughout Canada.

“It’s one of those discs that works great on repeat, because each time through, I just keep liking the songs more. This, to me, is what a rock and roll record is supposed to be, and it’s been awhile since I’ve felt that way.”

“One listen to the first single “One Good Reason” (which cracked top 30 in Canada) from upcoming record Warhorses reveals a band with energetic, power-pop sensibilities and arguably endless potential for success.”

“Hunter’s whipped his trio into a tight rock unit, and come up with songs like “Run for Cover” and “One Good Reason” that stay in your head for days thanks to his melodic ingenuity and the emotion he pours into even the simplest of lines.”